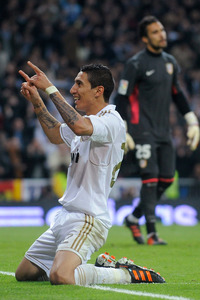 The Spanish capital is painted white after goals from Cristiano Ronaldo, Angel Di Maria and Gonzalo Higuain earned Real Madrid a 4-1 victory over Atletico Madrid on Saturday at the Santiago Bernabeu.

After the visitors controlled the early stages of the contest, the home side managed to respond to secure the three points to ensure they remain top of the table after 13 rounds.

The rivalry got off to a cracking start just 15 minutes in and it was the visitors who took the lead when Adrian Lopez worked a quick combination on the right side before being sent into the box by Diego, where the young Spaniard punished Iker Casillas with a simply finish at the front post, bagging his fifth league goal of the season.

The home fans were silenced, but it would only be temporary as Los Blancos responded just six minutes later. Di Maria filtered a soft pass into the box, ultimately finding Karim Benzema, and the former Lyon man took a touch past Thibaut Courtois, who brought him down with his outstretched arms as a penalty kick was awarded in addition to a red card brandished to the on-loan shot-stopper.

Sergio Asenjo came on to replace Thibault as Diego was sacrificed. Ronaldo took the spotkick for Madrid, faking out the goalkeeper before finishing inside the left post to level proceedings.

There were no further goals in the first half but just three minutes into the second, Di Maria put Jose Mourinho’s side in front. Ronaldo darted down the left side into the box to draw out Asenjo, before sending in a low ball that found the quick Argentine alone in the middle of the area and he finished well into the top of the net with an open goal.

In complete control, the home side extended their advantage in the 65th minute after Higuain chased down a ball that Diego Godin failed to clear as he strode into the box before making a move past the goalkeeper and finishing into the open net.

It went from bad to worse for Atleti with 10 minutes to go as they were reduced to nine men. Diego Godin was given his marching orders when he brought down Higuain inside the box which resulted in another penalty kick. Ronaldo stepped up again and sent his shot into the same side of the goal to wrap up the 4-1 win.

With the numerical advantage, the home side had a few more chances as the game reached its end and were able to control the Atletico attack to ensure the points to Jose Mourinho’s team.

With the victory, Real Madrid now have 34 points and remain in first place in La Liga, while Atletico Madrid sit mid-table with 16.(goal.com)

You can see the goals on the page Videos