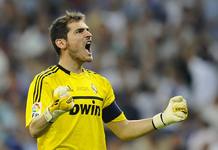 Iker Casillas was paid tribute to before the derby kicked-off for earning his record 127th caps with the Spanish national team. The goalkeeper analysed the match for the media once it was over.

“The match wasn’t all good for us at the start. Atletico scored early on. They defended fiercely and it isn’t easy for us to play that way at the Bernabeu. Courtois’ red card was key because it forced them to make greater efforts and Di Maria’s goal made them advance their lines more.”

“We now only think about our match against Sporting Gijon. It’s been difficult for us to win at their stadium in the last few years and we should use this week, in which we’ll play no other games, to prepare well for it. Our 13 victory streak is spectacular and we must keep up the good work.” (realmadrid.com)

5 thoughts on “Iker Casillas: “Our 13 victory streak is spectacular””